skip to main | skip to sidebar


For this part of the module I have decided to look at the subject of Net Art. I am intrigued to find out its definition, history and to look at some examples. I understand that this is a vast subject matter to approach but I will look at it briefly to get an idea of what its all about, and then use it as a basis to look at a particular area related to my practise for my essay.

The term ‘Net art’ originated from when Vuk Cosic came across a scrambled email message where the phrase ‘net.art’ appeared in several places. The dot was removed but the term became popular among artists in the New Media scene. The term was officially used for the first time when Vuk Cosic arranged a meeting for artists called ‘net art per se’ in Trieste in 1996.

One of the first online galleries was Benjamin Weil’s ‘äda web’. This was an Internet space that featured work by both already established artists who were experimenting with the genre, alongside Net artists. At this time in the mid nineties Net art was still seen as an experimental genre, therefore the funding for this area was not always made available. Weils’ ‘äda web’ found itself fall victim of this and lost its financial support. Fortunately the galleries’ work was permanently archived by the ‘Walker Art Center’, and they continued to support Net art. 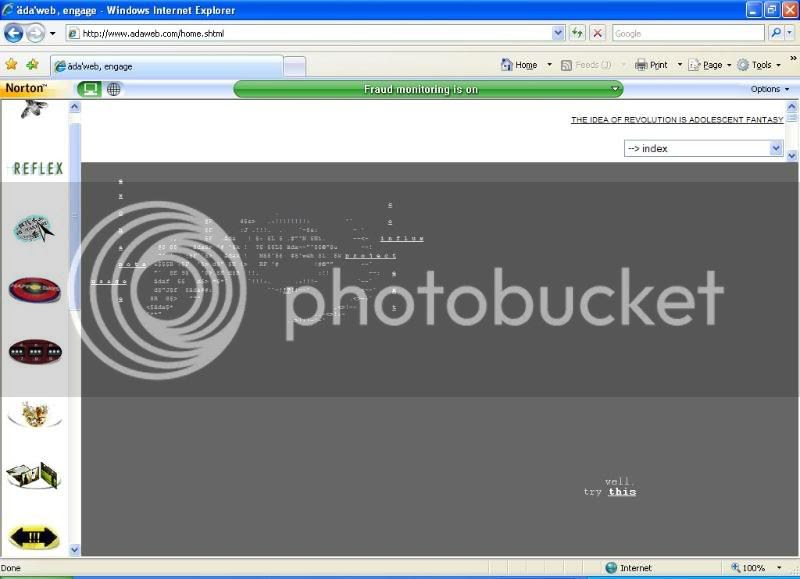 
‘äda web’ has since been re-created, featuring the same artists from 1996 this is how it appears today. The site ‘jodi.org’ was created in 1993 by Dirk Paesmans and Joan Heemskerk, it is now known as ‘wwwwwwwww.jodi.org. This is a popular example of early Net art. When you first open the page you are met with a scramble of green letters and punctuation marks. It seems as if an error has occurred during the HTML setup or browser software. However if viewers look at the source of the page which shows the coding used for the site they will understand the meaning behind it. 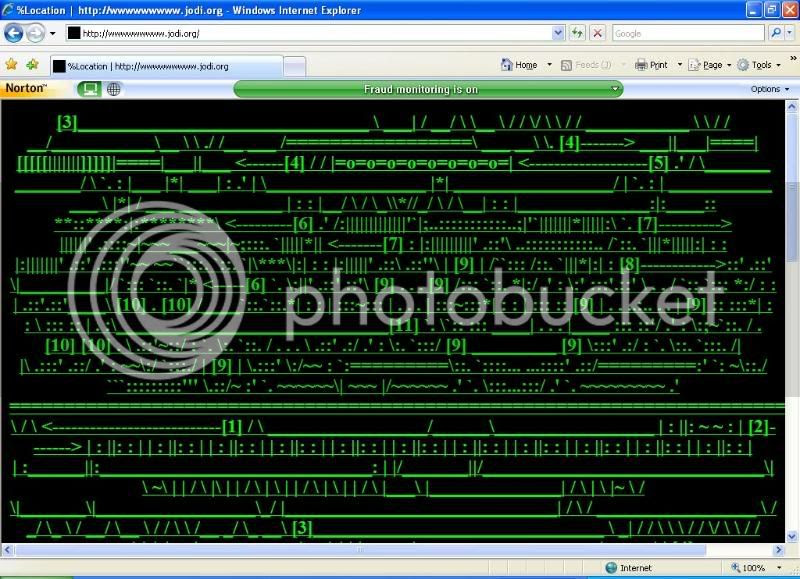 The artists have carefully created a diagram between the correct HMTL tags for the page. It is made up of dots and slashes depicting a hydrogen bomb. When exploring past the home page it becomes clear that the page isn’t an error, it’s a continued look at the ‘glitch factor’ of the Internet. 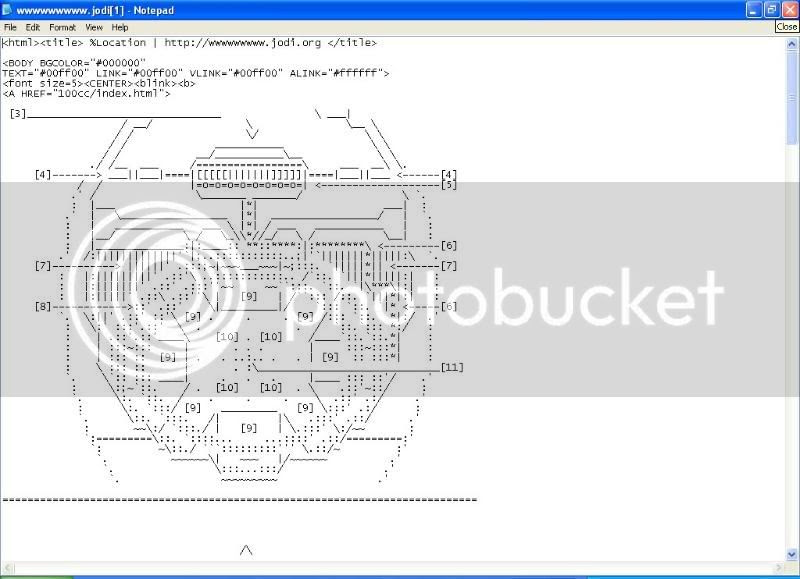 Mark Tribe explains in New Media Art that their idea was to hide an image of a bomb within the source code of a Web page, so that the browser would try and read it as a HTML file blowing it up on the screen. It is interesting to see how this use of hidden coding was found so early on in the creation of Net art.

Jodi.org began to change the way people think about the internet proving that it wasn’t just an outlet to publish information to a mass audience, but it could also be an art medium in itself. The Internet had created a place where artists, critic’s curators and collectors could communicate internationally. The use of forums and email newsletters had been in place for a reasonable amount of time already but new dimensions were being created. Some artists used the internet as a means of documenting their work. For example to display a portfolio of images, whereas others embraced the internet as a medium in its own right, and used it to create art in its primary form.

THE ART OF SLEEP, 2006, has been commissioned by YOUNG-HAE CHANG HEAVY INDUSTRIES for Tate Online. The page fills the whole of the computer screen and captures the attention of the viewer, using black text on a white background. The text is teamed with jazz music which compliments it well. The piece runs for 18 minutes and tells an amusing story. The piece runs on its own and only requires the viewer to initially open it. 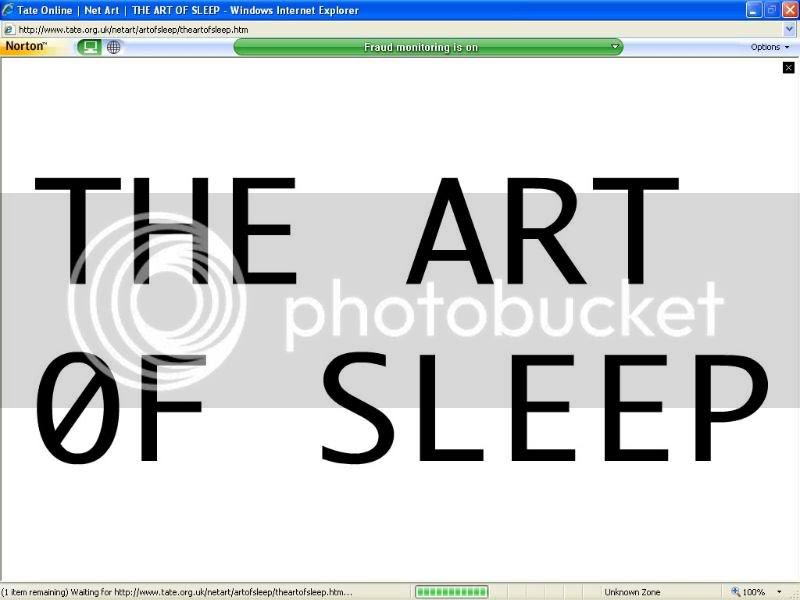 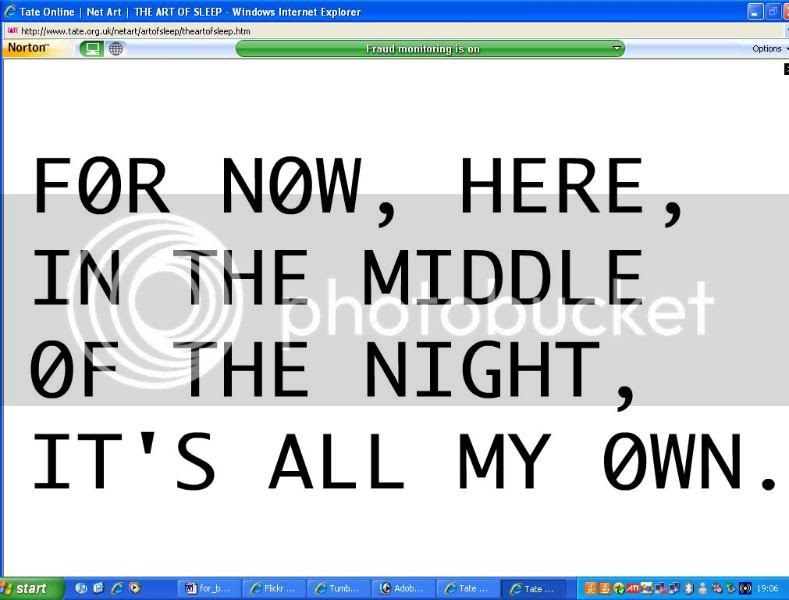 THE ART OF SLEEP, 2006
http://www.tate.org.uk/netart/artofsleep/

“Characterized by classical and jazz scores, and rushes of HTML and textual surfaces it explodes the flatness of the web with literary propositions”
Rachel Greene, Internet Art, 2004

The piece is doesn’t require constant interaction from the viewer, which almost makes it seem like a piece of television or animation. It is available in a range of different languages. It could be argued that this piece of work doesn’t need the Internet to be exhibited all it needs is a screen and a loop setting. In my opinion it reflects the ‘flatness’ of the Internet in the sense that we see and do everything through a screen and is choosing that way in which to communicate, however we don’t just sit in front of an Internet page and expect it to navigate on its own. As a user we are required to do that ourselves.


Unfortunately I couldn’t get a copy of this particular piece in its original form, hence the screen shots. This doesn’t quite capture the essence of their work, therefore I have found another piece called ‘So So Soulful 2006’, this is very similar in its approach.

(unfortunatley this wouldn't copy into the blog space)

“Are we still reading, or are we looking at images that appear and vanish before we have had time to grasp their potential meaning?”
Rudolf Frieling, Internet Art


This is an interesting point to raise, are we just seeing internet art through another screen? Similarly to the way we watch television. The work isn’t viewed in an ‘art based space’ such as a museum or gallery. Does this alter the way in which we experience it and how we understand it?


This piece of work ‘Screening Circle’ created in2006, by Andy Deck uses the basis of the quilting circle and its traditions as its main influence. The piece is created by users entering the drawing area and composing sets of graphics. When opening the second page you are faced with around 140 tiny squares in a large square shape, after clicking on one of these its opens another four. Then you are able to choose one of these to manipulate. The user is able to choose from nine colours and has complete control over what design to create with the 256 squares. After finishing your square it is automatically saved and can be viewed instantly. The site obviously was set up by Deck but can contributed to, by anyone, internationally. The artist isn’t adding or updating anything themselves. 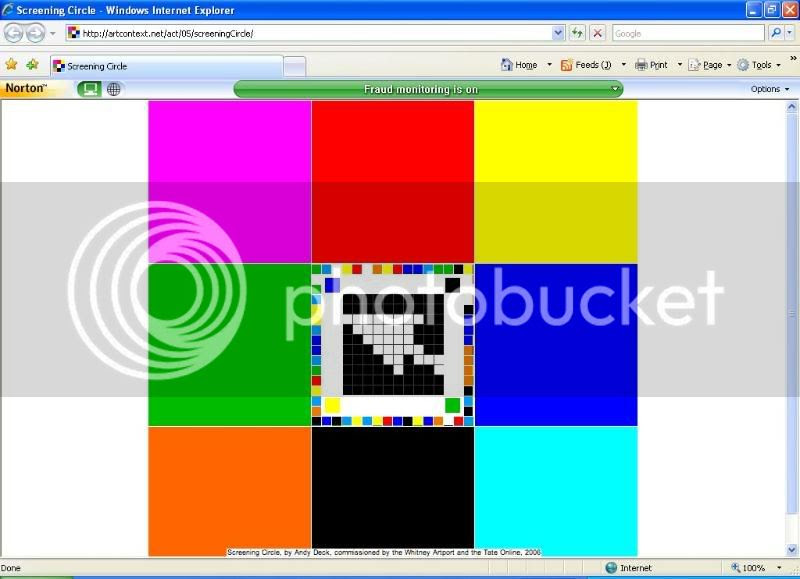 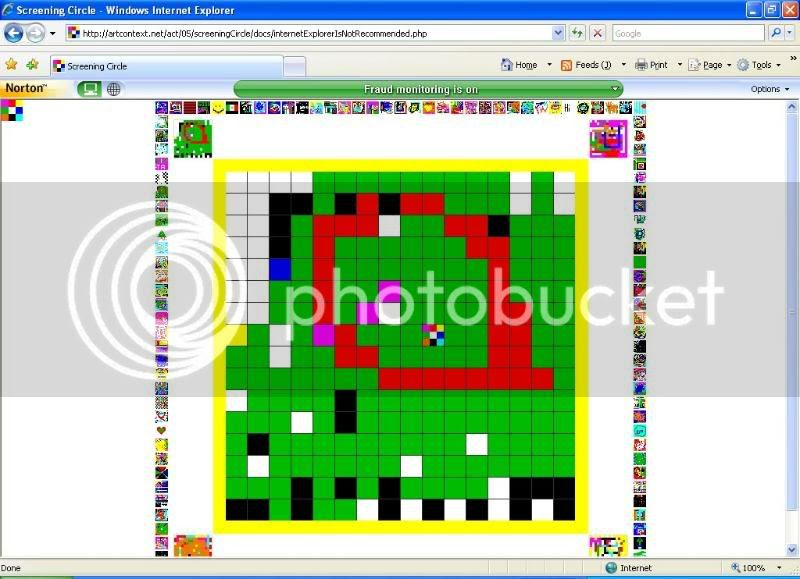 When you enter the web page you are required to enter a website of your own choice or to select one from the list. The Shredder then literally deconstructs the original site slicing and shaping the text, imagery and source code to form abstract compositions. 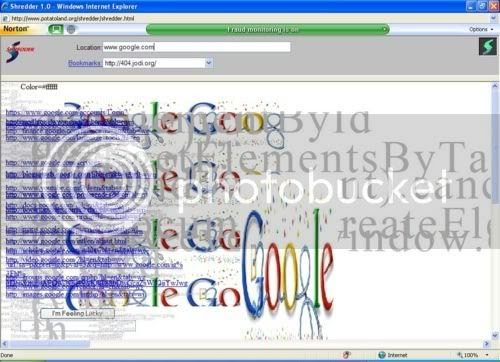 It works by passing the code in which a web page is written through a Perl script a simple programme that rearranges original code before passing it through to your web browser. The code is written so that the results are relatively the same. Some elements of the original web site can just about be recognized. The shredded versions seem to resemble the non representational paintings of Hans Hoffman and Gerhard Richer.

Net art is relatively cheap to produce; HTML and Apache web are programs that are available freely online. To create a piece of Net art the artist needs to have access to a computer with a modem, an internet connection and basic technical skills. It could be argued that many people have this opportunity and therefore anyone could become a Net artist.

Net art allows people to view art without being restricted by geographical distance, gallery opening times etc. Many galleries and museums lie in busy town centres and can sometimes be difficult for people to get to. The artist takes on the role of the creator, curator and the exhibition space within a short space of time. This cuts down costs, for example some artists would have to pay a gallery to exhibit their work, whereas online the costs of setting up a website are significantly smaller.

Although many people have personal computers, not everyone has a home internet connection. This cuts down the audience significantly making Net art available to a certain class of people. This isn’t a good marketing point for Net art, as it could be argued that if it was in a gallery than everyone could have access to it if they wanted to. Net art is reliable on computers and the Internet to work properly. Technology is constantly changing and pieces of work created on certain software may easily go out of date and become unavailable. It is because of this that new media art is hard to preserve and archive